Network Support & Security that works!
Home » Blog » 5 Web-Hosting Platforms That Will Scale With Your Business

5 Web-Hosting Platforms That Will Scale With Your Business

In the age of virality, the days of hosting services not being able to handle a sudden influx of users–from a DDOS attack or a marketing technique that worked extremely well–is quickly coming to an end. In the day-of-age of overnight virality, many web hosting services have been upgrading their server’s capacities to handle the ever-increasing number of people using the internet across the world. However, the increasing number of users also comes with an increased number of cyber crimes. There has been recent jaw-dropping server breaches that have cost companies millions and have even lead to foreign espionage. More than ever before, choosing the right web hosting service that takes privacy seriously but also has servers that can scale with your company is becoming foundational for online businesses. Here are a few web-hosting services that will scale with your business and conduct server-specific functions based on your company’s needs.

HostGator has a plethora of options for those who want the most bang for their buck when it comes to hosting. HostGator is the go-to hosting platform for newcomers while also offering more customizability for those who are more tech savvy. While HostGator’s servers are primarily used for blogs, more specifically WordPress, the platform contains specific functions for a wide array of services from e-commerce to subscription websites. With a Starter Plan that can hold over 100k+ users a month along with a value-dedicated server to handle specific data for your site, it’s perfect for those that value security and wish to scale.

However, let’s say you are a more experienced developer who wishes to fully customize your hosting service to cater to your specific specifications, then AWS should be your option. AWS does not come with features that other hosting platforms offer like a cPanel, scripting, and 24/7 customer support. However, comparing it with other hosting platforms like HostGator is disingenuous. AWS is for those that need a dedicated server in comparison to other hosting services. AWS also tends to be slightly less expensive with more “on-the-dot” costing if you configure it correctly. It’s mostly used for large-scale projects thanks to the customizability of the server attracting mega-enterprise companies like Zoom, for example.

Choosing between BlueHost and HostGator is like choosing between Coke and Pepsi. The two hosting platforms share a lot in common and offer many of the same functionalities. However, Blue Host servers load twice as fast as websites hosted on HostGator and reign supreme when compared to other web hosting platforms. While HostGator might be the go-to for beginners hosting a WordPress website, BlueHost is for the slightly more experienced people who want a bit more functionality coming from their WordPress web server. However, the biggest selling point for many is BlueHost’s reputation for security. BlueHost offers free SSL certificates and complimentary website backups; BlueHost’s emphasis on security could be a selling point for people to choose BlueHost over HostGator. Nevertheless, it is a great step-up from HostGator.

If your only means is to test a service, Heroku is ideal for you or your business.  Portfolio websites often use Heroku to host their sites. Heroku is good for stateless, static websites that are on a small budget. However, they can scale with upgradeable bandwidth sizes if needed. Heroku might not be ideal for eCommerce applications; however, for small-scale, non-complex applications, it does the job well.

While HostGator is easier and BlueHost is more secure, DreamHost has a bit of both and it is cheaper. DreamHost comes with a free domain name on purchase along with more feature choices you would like to have on your server. Instead of bundled add-on packages, DreamHost gives you the option to have packages taken off, dollars saved with each feature cut from the final purchase. It is great for those who would like more of a choice of features from their hosting platform while saving money. Otherwise, it is equivalent to HostGator and BlueHost in almost every other way. 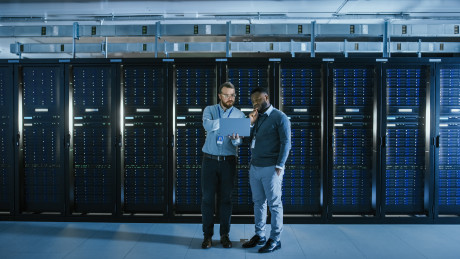